Banbibi is the most celebrated demigod of both the Hindu and Muslim inhabitants of Sundarban, and she is the guardian spirit of the mangrove delta. The narratives of Banbibi are found in several texts named as the 'Banbibir Jahuranama' and 'Banbibir Keramati'. Renowned poets Bayanuddin and Munshi Mohammad Khater were the writer of the verses. These texts consist of two major episodes, her battle with Dakshin Rai and the narrative of Dukhe.

According to the verses, Banbibi is the daughter of Berahim and Golalbibi; Shah Jungli is her brother. Golalbibi left her daughter in the forest after that, Banbibi was brought up by a doe. She is mounting on a tiger and posses a pet crocodile named Seko. Red Jungle fowl is offered to Banbibi to please her. In every camps of Sundarban Tiger Reserve there is a shrine of Maa Banbibi to protect and safeguard the people. Banbibi is also known as Bandurga or Bandevi in colloquial language. 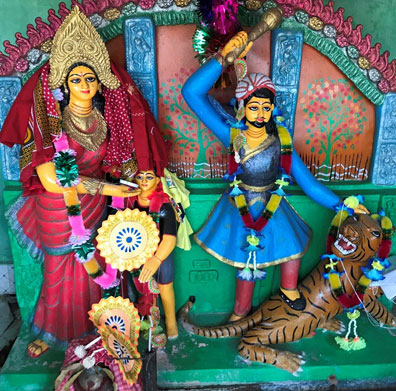 The etymology of Dakshin Rai is 'King of the South'. He is regarded as the overall ruler of the Sundarbans; who rules over beasts, demons and ghost-spirits (Begho) of the mangrove. He is the son of Danda Baksha and mother Narayani. His father was the ruler of the entire Sundarbans. He is depicted with large whiskers with slender body and a shiny-yellow tinge, which is decorated with tiger-like stripes. Drool drips from both sides of his mouth and he has a six-meter-long tail. Rai is appeased with animal sacrifices. He also likes music and attracts musicians.

A shrine of Dakshin Rai is located near a railway station named Dhapdhapi in Sealdaha- South lines. Inhabitants of the Sundarbans pray to Dakshin Rai before venturing into the mangroves for their livelihood. Aboriginals bind a mask with the face of Dakshin Rai to the back of their heads, so as to confuse or scare an approaching tiger and ward off its attack. According to the Banbibir Jahuranama Dakshin Rai is defeated by the divine power of Banbibi and Shah Jungli and took shelter to Bara Khan Ghazi (aka Ghazi Pir). 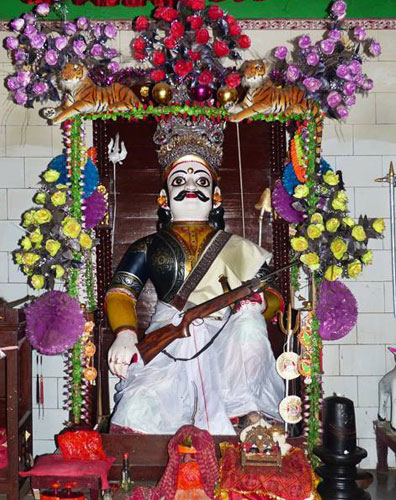 According to the legends Ghazi Pir aka Bara Khan Ghazi was a Muslim saint of Sundarban. Defeated after the battle with Banbibi, Dakshin Rai fled and took refuge to Ghazi Pir in the forest. Banbibi and Shah Jungli followed Dakshin Rai to chase. Finally, Ghazi was somehow able to convince Banbibi not to harm Dakshin Rai. In return, Ghazi Pir gave Dukhe seven carts full of precious items. He is also worshiped by the local inhabitants of Sundarban with great devotion. 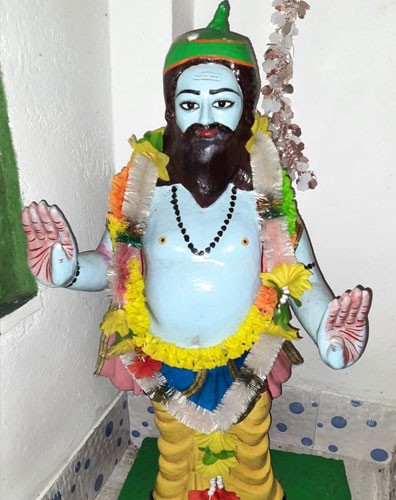 Dukhe is a mythical character described in the Banbibir Jahuranama. Once upon a time there lived two Mouley (Honey collector) brothers called Dhona (Dhanai) and Mona (Manai) in Sundarbans. Dhona wanted to go for an expedition with a naval fleet to collect honey and wax from the dense mangrove of the eighteen tides (Beng. Aatharo Bhatir Desh). Opposed by his brother Mona, Dhona took a local shepherd boy Dukhe to go.

Betrayed by Dhona in Kendokhali Char, Dukhe was attacked by Dakshin Rai. Dukhe started chanting of Maa Banbibi. Dukhe was protected by Banbibi and her brother Shah Jungli from Dakshin Rai. Rai took refuge to Ghazi Pir who somehow convinced Banbibi that, Rai will not harm her devotee Dukhe. Ghazi gave Dukhe seven carts of precious items, while Rai presented him a good amount of wax and honey. Seko, the pet crocodile of Banbibi dropped him to his village. Later, Dhona married his daughter Champa to Dukhe, and he became the chief (Chaudhury) of the village.
Dukhe propounded the stories and popularized the worship of Maa Banbibi in Sundarbans. It is believed that the idol of a small boy in the lap of Maa Banbibi is Dukhe. 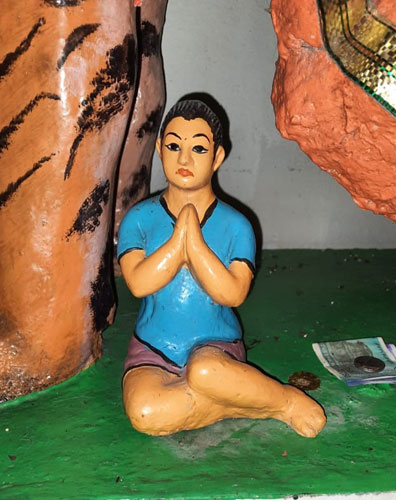 It is the oldest legend of the snake goddess Manasa, locally known as Maa Bishari, Padmavati or Janguli. Manasa is considered as a Non- Aryan deity, whose one eye is blind. Due to the large numbers of venomous snakes and the snake- bites cases in the area she is worshiped with great devotion. In the verse, several characters namely Chand Sadagar (Merchant Chand); Behula; Laxmindar; Netidhopani etc are portrayed.

According to the Manasa Mangal, Laxmindar (Chand's son) was died due to a snake-bite. It is believed that, Behula went through River Adi Ganga by this route carrying her husband Laxmindar's dead body. Several locations of camps and beat offices under Sundarban Tiger Reserve are named after the mythical characters, like Chandkhali, Netidhopani etc. 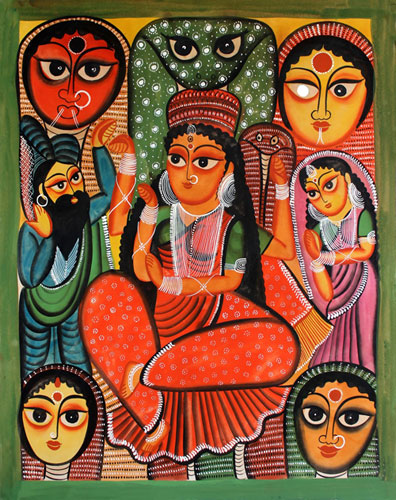